Visit any Melbourne park and it is immediately obvious that patches of public space mean different things to different people. One’s shade tree is another’s hub for playing chasey; and not everyone sees lawn as an invitation to throw a Frisbee or boot a footy. So we’re lucky that Melbourne has parks aplenty suited to diverse wants and needs, a factor, no doubt, in Victoria’s capital being voted the world’s most liveable city by The Economist seven years in a row.

Charles La Trobe, the first superintendent of the Port Phillip District of New South Wales, and subsequently first lieutenant-governor of the colony of Victoria, set aside expanses of land around the young city of Melbourne for open space, parkland and gardens. While formal sportsgrounds, hospitals, rail lines and houses have since reclaimed much of that land, and the city’s continuing sprawl and infrastructure projects threaten more, the capital of the once number-plate boasting “garden state” is still dotted with green. An Aboriginal camping ground before European colonisation and the largest open space in the inner-city, Royal Park is a remnant of La Trobe’s vision.

The Macquarie dictionary defines a park as: “an area of land within a town, often with recreation and other facilities, which is set aside for public use.”  But how do you define “use”?  Melbourne has wonderful parks in which to do all manner of things – or nothing at all.

The corner of Warrigal and South roads, Moorabbin, doesn’t scream “bird watching paradise” but Karkarook Park is filled with surprises. A 40-hectare oasis in a desert of industry, it centres on a lake open to kayaks and small single-hulled sailboats and its wetlands filter bay-bound stormwater. 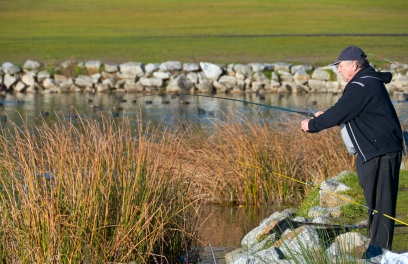 The lake was once a sand mine – Karkarook is an aboriginal word meaning “sandy place” – but feathered and human fishers now compete companionably for rainbow trout and red fin.

Intensive revegetation has attracted birdlife and purple swamphens, white-plumed honeyeaters and superb fairy wrens are among the 110-plus species recorded in the park. You can watch them from a waterfront hide, just off the 6km of walking tracks, but birds also paddle around boardwalk uprights and waddle past picnickers on the manicured lawns.

In the Wurundjeri dreaming, Bunjil the wedge-tailed eagle created Darebin Creek and its surrounding bush as a place for people to find joy and be at peace, and that’s the ultimate aim of the Spiritual Healing Trail in Darebin Parklands (also known as Rockbeare Park). 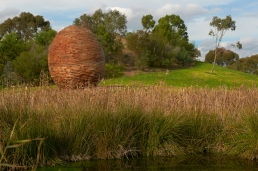 Gifted by the Aboriginal and Torres Strait Islander community as a gesture of reconciliation, the trail takes a 1.4km walk through the park, along the creek and onto Mt Puffalo’s rocky crown. A brochure and signs guide you through the five stages: Gathering, Purifying, Contemplation, Possibilities and Ready to Go.

Take time out to slow down and get in touch with yourself, with others and with the land.

It’s exhausting just ticking off the get-fit options in Princes Park, which reaches 1.5km along Royal Parade north of the city.

At its heart is the historic home of the Carlton Football Club, now the Blues’ administrative centre and training ground and home ground for Carlton’s AFLW games. Carlton Cricket Club and Princes Park Carlton Bowls Club have also been based here since the late 19th century and Princes Hill Tennis Club since 1919.

Pedestrian and cycling tracks circle and crisscross the park, with distance posts and an assortment of torture equipment (sorry, exercise stations) around the 3.17km circumnavigation. The shared use Capital City Trail runs through Princes Park on its 30km loop around Melbourne.

Then again, you could just kick a ball – round or oval – on a playing field or join the dog walkers.

If you were a dog, your ears would twitch and tail wag on leaping from the car at Burns Reserve, adjoining Altona Coastal Park. Dogs on leads are welcome in the reserve proper, which protects 70 hectares of intertidal and salt marsh between Kororoit Creek and Port Phillip Bay, while the beach fronting the reserve is a leash-free playground for four-legged friends.

And friends they are, with big and small canine regulars carousing on the sandy flats and chasing each other into foaming shallows as their humans chat.

The park enjoys uninterrupted views of Port Phillip Bay and the Melbourne CBD and is prettiest at dusk, when the setting sun silhouettes pelicans flying in for the night.

Messing about in Boats

With apologies to Ratty in The Wind in the Willows, there is nowhere – absolutely nowhere – half so much worth going to mess about in boats as Albert Park.

Spectacularly situated with Melbourne’s CDB as backdrop, the lake is prettiest early morning, when you may see hot air balloons drifting over the office towers, their burners flaming brightly in pastel light.

Paddle boats, kayaks and sailing dinghies can be hired at the northern end of the lake along Aquatic Drive. Here too you can enjoy an introduction to sailing and, should the bug bite, take lessons. And while you are on the water, landlubbers can stroll 5km around the lake, which is one of Melbourne’s prettiest short walks.

You can get almost anything in and around the Oakleigh shops, including an insight into the suburb’s history at the Pioneer Cemetery in Warrawee Park.

Surveyed in 1853, the township of Oakleigh was one of the first places in colonial Victoria (with Coburg, Geelong and Ballarat) to establish a public cemetery reserve. Surviving headstones and columns, some encircled with rusty iron lace, rest beneath shady trees between a car park, children’s playground, sports oval and Warrigal Road.

Seven year-old Christina Couper was the first person buried here, in November 1860, and the last burial took place 99 years later. Among those interred between times were German migrant Charles Ferdinand Edward Zorn, whose sauces and pickles won international awards, and James Black Ronald, who was elected to the first Commonwealth Parliament in 1901.

Freesias carpet the cemetery in spring.

Escape to the Country

Mt Waverley is a proudly leafy suburb, its houses and unnaturally tidy gardens thread with ribbons of replanted, revegetated native bush. But Valley Reserve is different.

And the wildflowers! Vivid blue sun orchids bloom on hot summer days. Pretty white milkmaids and chocolate lilies prefer the spring. Then there are the enamel-red running postman and other flashy pea flowers.

Strolling through Valley Reserve is like stepping through a door into the countryside usually found only well beyond Melbourne’s fringes.

A 3-hour bushwalk in the Warby Ranges, north-east Victoria, on a sunny Saturday a week back, reminded me why I love Australian wildflowers, many of which date back to Gondwanaland and link us to other continents created when the supercontinent broke up.

Western Australia is the undeniable star of Australia’s annual spring and summer wildflower spectaculars, with floral carpets in high-vis hues unrolling across acres of outback. But Victoria puts on a colourful show too.

In peak seasons it’s almost impossible to hike anywhere in Victoria without seeing flowers, but these five favourite walks are ideal for indulging passions for florals.

An easy 3km amble through a patch of rare, remnant eucalypt forest on the edge of the Goulburn Valley never ceases to delight. A mixed assortment of winter fungi make way for spring and summer wildflowers and if you stop to look at one you’ll discover half a dozen other varieties in a few square metres. 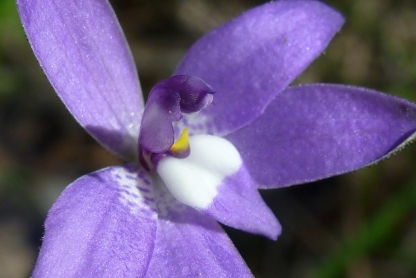 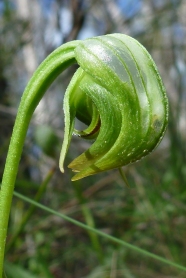 When the snow melts, paper daisies, snow gentians, pea flowers, buttercups and many more flowers open to the alpine sun and embroider the exposed high plains with colour. If you’re not up for the full walk between ski resorts (20+ kilometres), a shorter walk from either end will soon have you among the blooms.

Don’t let the mostly flat terrain and short distance fool you. When the wildflowers are out, this track through old gold mining country forested with box and ironbark can take much longer than you planned. I set the known record of 5 hours treading the loop with friends equally as enamoured with flowers as me!

One of my favourite Victorian walks, a long 2- or 3-day loop to the Prom lighthouse via the Waterloo and Oberon bays, gains a whole new level of wow when the coastal heath is blooming. Washes of white, pink, and red augment landscapes worked in granite grey, multiple greens, sand yellow and sky blue. 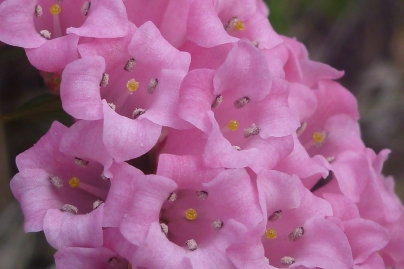 Suited to adventurers of all ages, this fun walk-cum-clamber in Victoria’s sawtooth western ranges, begins in a sea of Grampians thryptomene, one of more than 900 native plants found in the mountains. Down at ground level, you might also see cartoonish yellow-and-brown leopard orchids. And once you start looking…

These wildflower walks, and many others, are described in detail in my book Top Walks in Victoria, published by Explore Australia

Recent rains have left much of Australia’s famously “wide, brown land” sodden and very green but whatever the conditions – drought, flood or idyllic in-between – Australia’s ancient mountains, volcanic plains and deserts – unrolled flat to the horizon or gathered into dunes – pack a visceral punch.

These landscapes can leave you literally breathless, and make it almost impossible to lower and narrow your focus. Do so, though, and your rewards are floral gems in every rainbow colour; flowers that burst from fertile soils or struggle through unforgiving rocky ground; flamboyant look-at-me blooms and shy performers that open in sheltered nooks where only the inquisitive will find them. 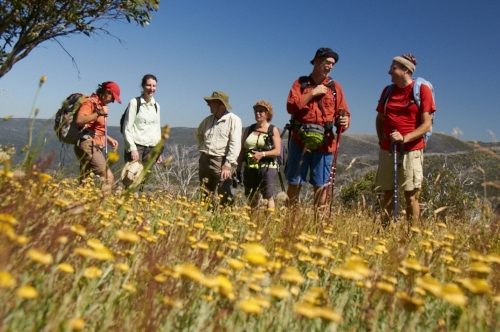 With cold, wet wintry weather finally starting to loosen its grip, the native blooms dotting my Victorian country garden remind me of the gobsmacking wildflower displays through which my husband and I drove and walked last year while researching my recently released second book, Top Walks in Australia (published by Explore Australia).

Home to half of Australia’s 24,000 native plant species, many of which date back to before it broke away from the Gondwana supercontinent, Western Australia is the headline act in our annual floral extravaganzas. But every state and territory has places where you can tiptoe through the tulips, so to speak.

Here are some of my favourites:

Renowned for its much-photographed Murchison River gorge scenery and the natural window that frames the view, this rocky walk is softened with wildflowers of every shape and size, including the stalky, sky-reaching pink pokers (Grevillea petrophiloides).

Walking along WA’s southwest coast, from surf beaches to precipitous cliff edges between capes Leeuwin and Naturaliste, is spectacular year round. But in spring, the flowers that unfurl across the heathland capping the sea cliffs are the icing on the cake. 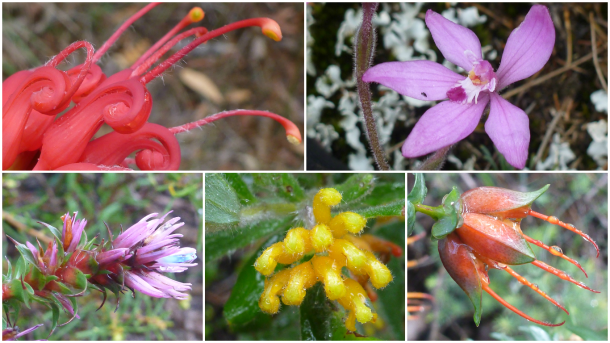 Arguably the best day walk on the 1000km Bibbulmun Track, and only 80 minutes’ drive from Freemantle, this loop reveals an assortment of flowers, from delicte orchids growing from cracks in the exposed granite slabs to grevilleas and other stunners on the plains.

To follow the first/last section of the 560km pipeline constructed in the early 20th century to transport Perth Hills water to the Kalgoorlie goldfields is to walk through engineering history. Add ridiculous numbers of wildflowers, including showy red, pink and yellow peas, and you’ve got a cracking short walk.

Stirling Ranges National Park, in the state’s south, is a wildflower wonderland and Bluff Knoll (1095m) commands views reaching to the sea. The short but strenuous climb takes you from rocky slopes decorated with gravel bottlebrush to hardy, wind- and snow-tolerant stubby montane that erupts in spring colours.

All these walks are written up in detail in Top Walks in Australia, available from me or online.